THE CREATIVE CRIMES FILES – EPISODE: THE CASE OF THE TAKEN T

Night in a squad room, a bullpen that’s more Law & Order than Hawaii Five-O (the new one, not the good one) — no giant flatscreens or gesture-controlled interfaces, just a couple of hardboiled branding crimes investigators at a battered desk, hunched over a coffee-stained keyboard and a monitor papered with Post-It notes going back to 1997.

ZACH GRACKLER is the rugged, cynical, goes-his-own-way veteran with disdain for the rules, impeccable hunches that always pay off in the fourth act, and a leading man jawline straight out of Central Casting, which is where we found the rest of him, too. Think Josh Holloway with less mullet.

DELILAH CONTEUR is his younger partner, jaded yet empathetic, gritty yet vulnerable, sexy yet sexual, with enigmatic secrets she conceals from the world through her fiery competitiveness, surprisingly tailored wardrobe and deft skills at product placement.  Her colleagues call her “Deli,” though with no condescension implied whatsoever. Think  a less expensive blonde twentysomething.

DELI: (Pointing at screen, which displays the discredited Tokyo 2020 Olympics logo) You know, it just blows my mind when people figure they can get away with this kind of heist. This massive fraud. This gargantuan con. This…this blatant design plagiarism.

ZACH: (Nodding grimly) Yeah, well, you gotta give them credit for having the cajones to try it big-time, at least. 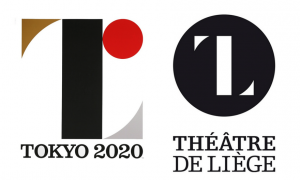 DELI: I’m surprised to hear that from you, Zach. You usually come down on branding and design bad guys faster than an iTunes download.

ZACH: (Staring off into the city beyond the window, a city trapped in the pitiless embrace of night) I wasn’t always a take-no-prisoners hardass living by my own set of rules, kiddo.

DELI: You never told me what drove you to become a FECCID flatfoot, Flach.  Um, Zach.

ZACH: (Gazing into the past, peering down a Slinky-like tunnel filled with faces and places and dramatic events, but not shown or anything, because he ‘acts’ this part) I was a designer once, Deli. Yeah, I thought that M.F.A. I had was my ticket to the top. Got a job at a hot branding boutique and started turning out logos and style guides for the buzziest startups in the country. You ever hear of an outfit called…Ebay?

ZACH: I had it nailed, dammit. (Shakes fist at a memory looming in front of him like a horrible, vicious…something-something)  Yeah, at least that’s what I thought. When we pitched it, I’ll never forget what they said. ‘We don’t like the serifs.’  Those serifs killed!

ZACH: So I went back to work, and I sweated blood over the next round. I ignored my wife, and she left me…hey, I barely noticed. All that mattered was that brand damnding. Uh…damn branding.

DELI: Wife? (Vexed) I thought I was the one with the enigmatic secrets character arc.

ZACH: I was sure I had it nailed…again. You know what they told me this time?

DELI: Did it still have serifs?

ZACH: That I’d ripped off Yahoo’s logo. That I was just a…a plagiarist.

DELI: (Wryly) At least you didn’t use an exclamation point, right?

ZACH: (Scowls at her)

DELI: Crap on a shingle. Sorry.

ZACH: You know what? They had me dead to rights. I didn’t even know it while I was doing it, but I’d cracked under all the pressure, and I’d jacked every one of my ideas. It was about as low and scummy and shameful as any creative person can go.

DELI: Lower than Sam Smith and Stay With Me?

ZACH: (Glares) I mean, c’mon, give me a little credit.

DELI: So that’s why you’re so consumed with hunting down the creeps responsible for half-assed logos, idiotic Photoshop retouching, and any TV spot using the Pointer Sisters or Mazzy Star?

ZACH: (Holds up nearly-touching thumb and forefinger) I’m this close to taking down John Krasinski.

DELI: Hey, have you asked your doctor about Zoloft?

ZACH: I don’t hate people for making branding mistakes. No, I’m out to stop the ones who keep victimizing the innocent with lazy choices, the ones who know they’re not really trying. They gotta sell something in to a client, so they go with what’s familiar, right? That’s worse that what that Japanese designer did.  He probably never meant to rip off other people’s branding. All he might be guilty of is not pushing himself far enough, settling for an idea way too obvious, the kind somebody always gets to before you. Hey, we’re all human beings. We’re not perfect.

DELI: Actually, they think he might’ve plagiarized on other projects.

DELI: Um, we don’t have jurisdiction in Japan.

ZACH: You know how I feel about rules.

DELI: We really don’t have jurisdiction anywhere. I mean, you get right down to it, all we really do is put out a newsletter.

ZACH: (Standing tall) You know what? Time to stop playing nice. That next newsletter…is gonna kick butt and take names.

DELI: It better, we’ve only got 280 people on the list right now.

ZACH: (Suddenly stares at the monitor screen) What…what’s that?

DELI: Huh? I was gonna do a search for any other stories on the Olympic logo thing.

ZACH: (Points a trembling finger) That! What’s THAT?

(ZACH claps hands to his head, shrieks, turns and runs screaming out of office)

DELI: Oh, yeah, right. Like you ever worked on Google.

MUSIC: Music sting that sounds like Law & Order‘s but different enough we can get it through Legal.