When Starbucks says it’s doing a re-branding, it’s news worth the attention of nearly every shrewd marketer.  As one of the premiere powerhouses in experiential branding, in making its offerings and sales environment stand for something bigger and more resonant than “coffee bar,” they’ve been a lesson to brand stewards the world over.

The way they’re dealing with their logo revamp is indicative.  By visiting this site, you can view an entire video — featuring Howard Schultz himself — that talks about the brand, how it’s evolved, and their objectives in revamping it.  They get into the nitty-gritty of design exploration, too, as their creative director puts it:

...we wanted to recognize and honor the important equities of the iconic Starbucks logo. So we broke down the four main parts of the mark – color, shape, typeface and the Siren. After hundreds of explorations, we found the answer in simplicity. Removing the words from the mark, bringing in the green, and taking the Siren out of her ring. For forty years she’s represented coffee, and now she is the star.

However one may feel about the branding itself, the real point to consider is how Starbucks is getting extra traction here — building a meme and narrative around their logo, making the very process of revamping it part of a larger story about the roots and relevance of Starbucks.  Any business that’s in the process of revamping its brand or positioning should consider doing the very same thing: act as though your brand deserves a similar kind of attention and reverence…and when you change it, that’s news! 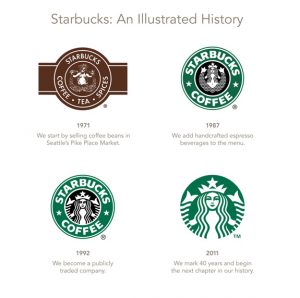