Theodore Sturgeon, among the great sci-fi writers and critics, made an observation about genre writing that got tweaked into what’s known as “Sturgeon’s Law,” and which others then applied universally: Ninety percent of everything is crap.

Here’s my addendum: When there’s too much crap, it’s all crap.

When it roars at you in a deluge, in a full-frontal flood of fetid mediocrity, it gets hard to cull anything good out of the assault. Ten percent, fifteen, twenty or more, it almost doesn’t matter…it’s buried by the sheer volume. As content consumers, we’re eventually daunted by fatigue at sifting through the whole annihilating mess.

57 channels and nothing on, brother, as Mr. Springsteen once sang.

THE SEASON OF OUR (DIS)CONTENT?

His starting point? People can only consume so much content. There’s a mental and emotional limit.

I myself am only able to scan a finite number of listicles per day with their 7, 15, 101 tips on how to make your content marketing jump up and solve your funnel-packing issues before I begin to weep, twitch and look away.

It’s the same reflux I get after two minutes of Jim Rome or an accidental glimpse of Hot In Cleveland.

Schaefer believes there’ll be a shakeout dictated by basic economics. As content explodes, as even the slightest content R.O.I. becomes more dear, marketers will need to spend more on content just to tread water. The small marketer, in other words, gets hosed.

But they probably knew that if they read my trenchant post, 48 Ways You’ll Be Hopelessly Screwed By The Impending Contentaclysm.

KNOW YOUR QUALITY FROM YOUR CRAPOLA 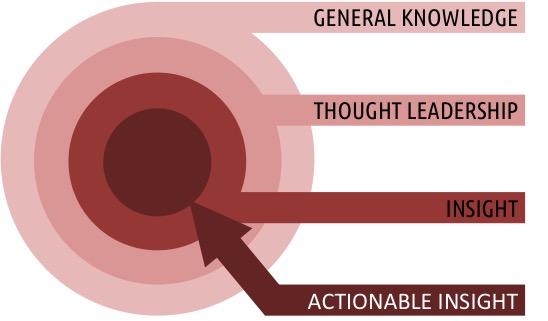 A business that’s come to rely on content marketing can weather the Contentstrophe, I’m convinced. How? By doubling-down on the best practices that can make them competitive in the here-and now.

Firstly, content marketers (myself included) have got to leverage quality content. To do that, we need to always pack a yardstick.

One that works is the simple content bullseye that shows what types of content draw prospects closer and closer to the conversion funnel.

Content that provides “actionable insights” – valuable, unique revelations about the issues and challenges close to your audience’s heart, insights that logically thread back to your brand benefits without hard sell, is the Holy Grail here.

HOW TO THRIVE? RAISE YOUR SIGHTS

Yet maybe you don’t use content marketing, despite all its promise and advantages. Maybe you’re not big on marketing automation. Could be you trip on the smell of convention center coffee and the cool embrace of Comfort Suites bedding. You’re doing just fine.

Face it: the tools and the platforms are only going to get better. Automated marketing and content strategies are, for better or worse, continuing to scale up, diversify, evolve.

If you’re using content marketing the right way, it may not matter if an actual mass Contentocide happens. Are you nimble? Are you smart? Are you (relatively) warm-blooded?

Like some Cenozoic vole, you’ll survive and thrive while the scrapers and the sluggards perish, because you stuck to a few basic tenets: