As we mentioned in Part 1, the invention of the printing press in 1439 may have paved the way for content marketing, but it has a much longer history worth examining.

Content marketing is a strategic marketing approach focused on creating and distributing valuable, relevant, and consistent content to attract and retain a clearly defined audience — and, ultimately, to drive profitable customer action.

Used properly, it’s an effective way to show your audience that you have something to offer that sets you apart from competition; whether to educate or sell, content shapes your brand and provides reassurance or ratification for your audience’s belief you’re offering something worthwhile.

The major goals of content marketing can be boiled down to a few key bullets:

Where did content marketing begin? The exact origins are difficult to pin down. As a much debated topic, expert opinions vary, but some of the most popular include:

While there are numerous examples of content marketing through the ages, these signify some of the more noteworthy moments in history:

The late 19th century brought with it a change in content marketing – this was the rise of consumer-driven content. Technological advances in communication allowed companies to forge stronger connections with their customers by offering information and education. Rather than advertising and pushing their products, marketers seized the opportunity to create relationships between customers and brands.

This was era of the radio revolution, and as this newfangled medium gained popularity, so did the notion of marketing to listeners.

This was a steady but unspectacular period for content marketing, mostly confined to existing models like sponsored radio (and then TV) programming, and print examples like the Karo Syrup ad below. This lull in its evolution owed to the fact broadcast and print media were now monopolized by advertising. 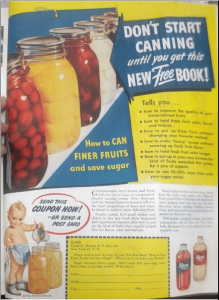 The rise of television provided companies with the chance to create consistent messaging about their brand that synergized across multiple media – TV, radio, print, and more.

This was a crucial time for content marketing, as campaign-driven content across multiple media became a thing, as the young ones would say today.  Multi-channel campaigns were a reality: companies were looking to spread the same content everywhere, across television, radio, newspapers, etc.

There were other developments, too, that presaged how content gets created and deployed today:

Finally, content marketing begins catching up with the advertising boom…

With computer usage rising around the globe, marketers moved away from TV, print and direct mail and shifted their efforts to digital channels. This was the “democratization” of content marketing, as the ubiquity of the Internet broke the hold traditional advertising had over media and marketing budgets.

The rise of content marketing has turned traditional businesses into media publishing companies. In an age when more traditional advertising formats struggle against the rise in ad blockers, content that consumers actually seek out is king:

Where’s it led us?

Technologies like artificial intelligence are obviously the outgrowth of our own darned cleverness, but they only evolve at the pace we’ve seen in response to a commercial need.  In marketing, it’s to both generate the content that’s needed to keep pace with the onslaught of competing content, and to also deliver that content with more effective timing and efficiency.

In our next post, we’ll talk about the dangers of content hypersaturation, and some of the ways to overcome it.

The Goldilocks Conundrum: How Process Can Kill Content Marketing