Know what struck me about this year’s Super Bowl spots? How many of them had already been exposed to consumers by marketers and agencies that seemed to feel it was a smarter content/awareness play to run them well before the game.  Excuse me, the Big Game. 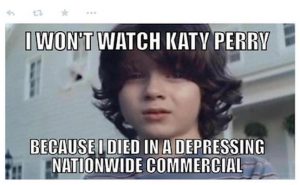 Not that the game didn’t see plenty of noteworthy spots.  Controversial ones, even, with the Nationwide spot at the top of that list. Why’d they run it? So we’d be talking about it today, because it was at odds with the usual fun-and-games of most of the rest of the pack. That’s disruption at its finest, people.

The buzz it aroused also would have been completely undercut if the spot had been exposed prior to the game.

Marketers who tease out the launch of a movie, or a product, or who choose to “preview” a Super Bowl ad to millions of viewers well before the game probably have well-considered rationales for making that choice.

But I can’t help thinking they’re missing out on leveraging that key truth about human beings, as consumers or witnesses to the world around us: our constant desire for surprise and delight.

Here’s an on-point example from the past few weeks in the auto business: 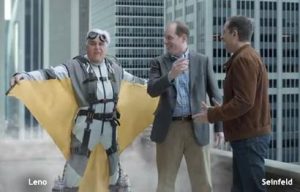 For a long, long time, Acura has been teasing the new Acura NSX. To the extent of including it in a Super Bowl spot with Jerry Seinfeld and Jay Leno.

At this years’s North American International Auto Show in Detroit, 3 years after that TV spot, Honda/Acura rolled out the production-ready version of the NSX. It should have grabbed huge industry buzz and consumer interest. It’s here! Finally!

Nobody cared. Not as much as Acura would have wanted them to care.

They’d been trumped. Journos and bloggers and intenders were looking elsewhere.

Seems that in a basement “skunk works” operation in Dearborn, Ford’s product people had been whipping up a supercar of their own: a new Ford GT, a successor to the $150,000 high-performance model that Ford had produced up till 2006. At the NAIAS, they rolled it out, too, in production-ready trim. 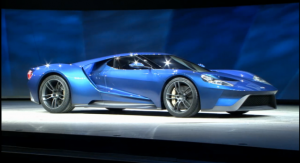 It blew everyone away.  It was chosen undisputed “best in show” and totally dominated the enthusiast media, and even consumer media, for days and weeks afterward.

But one huge reason it stunned and amazed everybody?  It had nada to do with design or specs or construction.

Ford had made sure nobody knew about the new Ford GT. People had been hoping for a sequel to the earlier model, but no one had the slightest inkling this car would show up in Detroit.

Its reveal surprised. And people were appreciative of the fact.

That’s one point that was echoed throughout the press and comments around the debut: how refreshing, how retro, how exciting it was to be honestly gobsmacked by a new car debut in this age of teased-out launches, with shadowy photos of car silhouettes or ultra-close-ups of headlights or grilles dropped to get our juices flowing.

The rub, of course, is whether or not what you’re rolling out is going to really stop an audience in its tracks. 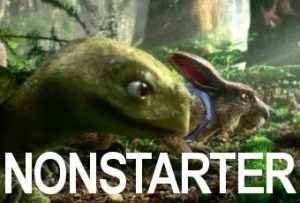 Maybe you’re really better off using the pomp and P.R. of a “tease” or “preview” because what you’re selling needs the hype, because it’s not exactly going to galvanize the world all on its own.

Mercedes’ stunningly stupid “Rabbit And Hare” spot for its AMG GT this year was an example. Better to trot the spot out early and take your licks. It’ll mitigate the downside. Sort of like an inoculation.

But if you think you’ve got the opportunity to stand your segment on its head and knock the competition on its hindquarters, weigh the merits of springing your Next Big Thing on everyone as a complete and utter surprise.  To do that, figure in a few key factors:

The best part of embracing the element of surprise? That would be the fun factor. It’s what people are always looking for, what they rush to embrace in an age when we’re bombarded with me-too products being calculatedly flogging with roided-up messaging.

Give them something to really and truly buzz about, and they’ll handle the rest.