Ben Zobrist goes to the World Series. Two years in a row, for two different teams. He helps the Kansas City Royals overcome long decades of futility. Then he joins the Chicago Cubs and gets the hit that closes the deal on ending a century of…”futility” is just the start of it.

Next day, he’s out in his front yard signing autographs for the fans. 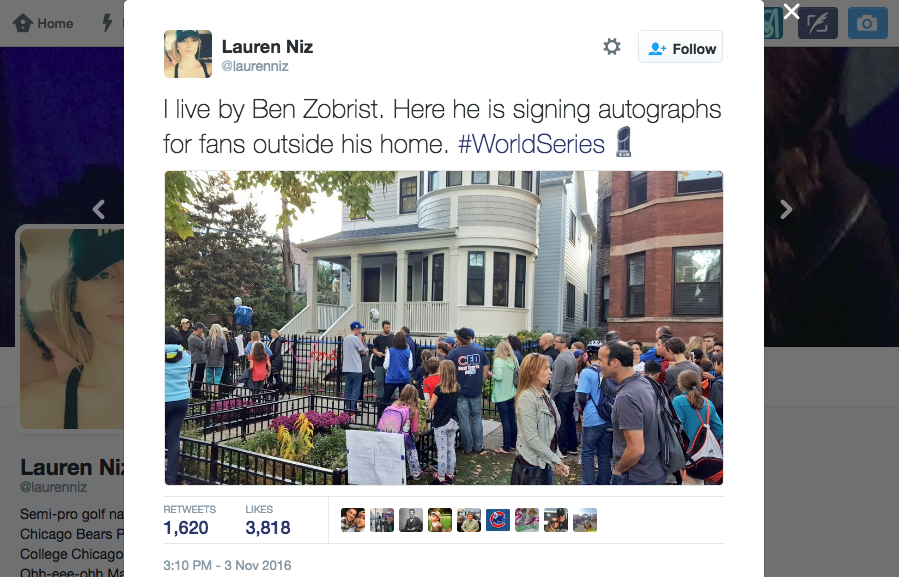 When a lot of bad behavior has decided to bubble up, and some people think the way to express their dissatisfaction, their agita, their existential pain, is by spewing vitriol.

Somewhere along the way, we’ve confused having a voice with the right to attack. Just because you’ve got one doesn’t mean you’ve got carte blanche to exercise the other.

When did we lose the brakes? Why did we decide that snark and character assassination were honorable attributes? More than grace and ethics?

The World Series was great because a bunch of elite athletes, some of them whip-smart and admirable, others perhaps not so much, go together and had it out on a playing field. With the pressures of history and fandom weighing them down maybe more heavily than with any other group of modern competitors.

They went out, they did their jobs, they respected each other and didn’t waver from being outstanding teammates, professionals, and for the most, yeah, good examples for the rest of us.

Guys like Ben Zobrist remind us of what grace and class are all about. How they’re part of the social glue that creates communities and, ultimately, a nation.

Maybe that’s too big a lesson to draw from a baseball player signing a few hats and pics and programs.

But maybe not. Because it’s the small moments of decency and connection that keep everything working for all of us.