If you’ve seen the latest spots in the Wieden + Kennedy’s KFC campaign, what was your first reaction?

There is no correct answer.

Swapping Norm Macdonald for Darrell Hammond was genius on a lot of levels. It instantly made the campaign exponentially more buzzworthy than it had been at its start, no insult to Mr. Hammond. 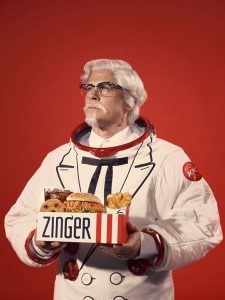 (My colleague Martin Bihl, creator and chief dojo of the ever-estimable The Agency Review, has suggested Chris Rock as the next man to fill the white suit. Me, I’d give Dennis Miller a turn behind the string tie, too.)

It probably succeeds in making KFC more relevant to Gen Y than it’s ever been, co-opting that whole meta-humor sensibility.

It also says something about brands and branding that might get lost on us professional-type marketers if we’re not careful.

There’s a temptation to think that to really score higher relevance with this audience, we have to stand a brand on its head, to poke wise at its established pillars, kind of like kicking at a truant officer’s legs.

We might begin to believe that brand icons, whether it’s an old guy in a white suit or a handsome sailor in a yachtsman’s cap, don’t hold the same value they once did. There’s truth in that. A whole generation’s urge toward transparency and authenticity has thrown a monkey wrench into that machine. Plus the fact that, well, the real Colonel Sanders is long gone and working that great fryer in the sky, probably cutting a frown across some Elysian boulevard at Dave Thomas’ burger stand.

The W+K campaign doesn’t mock the Colonel. Truth is, it makes more fun of our preconceptions about him, about how we regard brands and advertising. Like the Old Spice work over the past decade, it does what advertising is supposed to do, which is make us watch, give us reasons to buy, while having fun with tropes. 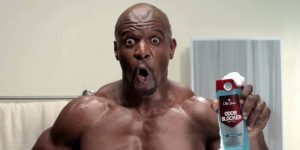 Does it make us connect with the brand on a deeper, emotional level? Sure. In ways a Boomer might, or might not, grasp. Watching Terry Crews flex his 438 muscles on behalf of Old Spice gives me fond recollections of Bruce Campbell in that smoking jacket, while getting the point across about the product, yet never overselling its utility (unlike AXE, whose spots look fuddy-duddy by comparison). Better to poke fun at the pretentiousness of hyperbole, and the poking is fundamental to how culture and people’s expectations have evolved.

When we wax on about disruption, or meta-marketing, or otherwise trouncing the shibboleths that have come before, we’re talking about a generational bedrock enabled by technology, media and other cultural forces. Icons are made to be overturned, or remixed, mashed up, handed over to the audience to do with what they will.

That proves a brand’s truth, so long as there’s an actual brand, a reason to believe and buy, at the heart of the exchange.

What we see with the new KFC campaign is a perfect example. Swapping spokesactors in mid-stride wasn’t just clever, it was necessary to make consumers give a rap about the brand.

When I threw together that multiple choice quiz at the start of this post, I cheated, and left out one answer that would have given away the game:

Q: What was your first reaction?

A: It was instantly recognizable.

Because for all its creativity and wit, it’s a campaign that’s also perfectly calculated in targeting how we embrace brands.