There’s a craving for disruption nowadays.

It’s why practitioners of innovation, or just clever hyperbole, label themselves as disruptors, even without the bona fides. Because there’s better press in it. Because consumers are increasingly on the lookout for disruptive tech, products and brands.

Disruption is on-point. Disruption is sexy.  Anything Elon Musk touches, for instance, gets disruptive attached to it. With good reason.

Has disruption really, truly happened of late in branding and marketing? Real disruption, not just shined-up incrementalism, where something new has kicked open the doors, grabbed an incumbent by the scruff of their fusty neck and and tossed them out on their wrinkled ass?

Here’s what made me think about this. It was when Dollar Shave Club got to me.

As did the jack I had to lay out for my last round of Fusion PowerGlider MacroBall Pro WTF blades at the local CVS, where they’re kept under lock-and-key like possible meth cookery ingredients.

I did my research about Dollar, and Harry’s, and other brands: the multiplicity and variety of websites devoted to comparing and rating razors was, forgive the term, hair-raising enough all on its own.

After my due diligence, I finally made the switch to Dorco blades. Yes, that’s the brand: I now use a Dorco on my face. 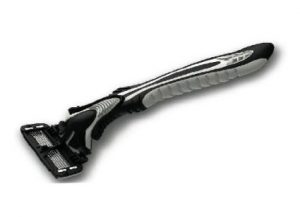 What compelled it? I mean, besides the name?

First off, they’re the OEM for Dollar Shave Club.

And at $1.70 a crack for a six-bladed cartridge? Six damn blades?

For most men, fetishistically obsessed with tech-mech errata – the titanium driver with internal gyroscopic flywheel! – that’s like driving a Lamborghini off the lot that wore the sticker of a Honda Fit.

Forbes ran a feature a couple years ago about the difference between innovation and disruption.  Disruption displaces existing markets or technology with something better, while innovation advances the game. So what’s Dollar Shave Club doing?

I vote disruption, not because of any one thing but because of the convergence of different factors:

1. A better product: Great razor blades at good prices, and – c’mon! – six blades!?  The first question I’d ask Gillette is, where’s your six-bladed cartridge, bub? How’d you get stiffed in this arms race, especially after decades of driving the category forward? Vibrating handles and Dyson-ball cartridge mounts come off as incremental gimmicks, the kind that happen when you’ve pushed the core product as far as you can.

2. A breakout sales model: By subscription! An interaction that delivers lower price and a (seemingly) more personalized relationship between seller and consumer! Gillette’s now jumped on the subscription bandwagon, too, promising lower pricing on their top-end five-blade product…which makes the consumer (me) ask, “But you can’t drive down drugstore/mass-merch pricing, huh? And, oh, yeah, those Dollar Share people? Six blades!“

3. By ballsy branding: The brand voice, the advertising? A fuck-you spritz of shaving cream right in the eye of the competition, pitched perfectly for millennials and a lot more of us besides. Lighthouse branding at its best.

4. Achievability: Without e-commerce, without the kind of just-in-time logistics Fedex and Amazon pioneered, would this have been possible 5 or 10 years ago? Hardly; imagine trying to market and fulfill an offering like this, with all its attendant buzz, via magazine buys in Esquire or Millennials Motorhead Monthly.

Instances like this aren’t moments when lightning strikes and all is revealed. It’s more of the forehead-smacking realization that the parts of this particular puzzle were there all along, waiting to be put together by a shrewd marketer.

Six blades is nice. But the real lever here is that a brand gave consumers an alternative that let them kick a futzy traditionalist to the curb.

For decades, the Gillettes and the Schicks and the traditional sales channels held consumers captive in a rigid relationship.

As with Amazon and the book business, or Tesla and the car category?  Once a viable alternative arose, people jumped on it.

By delivering a quality product positioned as a way for people to refute entrenched brands and pricing schemes, marketers like Dorco or Dollar Shave are jst seizing on a tradition as old as marketing itself. The smarter, cheaper, more liberating alternative wins the day again, and building loyalty because they gave people what they really wanted, could really use, first.

That’s disruption I embrace every day. With a smile on my smooth-shaven face.

UPDATE: Disruption pays off — Dollar Shave Club was acquired for $1 billion by Unilever.