The Utah Jazz are revising their logo, going back to a more retro look.  But first, I’d suggest they stop calling themselves the Utah Jazz.  Sorry — that’s just the persnickety branding geek in me, complaining about a brand that makes no sense in its current context.

Time was, teams had names that made sense because they were part of a sense of place.  They represented solidarity with the communities where they were formed.  They had as much local flavor as, well, the beer in the stands that was often brewed at a Schlitz or a Strohs plant up the block from the ballgame. 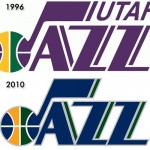 That day is kaput.  But it leaves us with some interesting branding oddities to consider — and use as conversation fodder for the pre-game visit to the local sports bar:

And then there’s the greatest logo in sports…