Just recently, I had the honor of getting a behind-the-scenes tour of the Jet Propulsion Laboratory in Pasadena, just a bat’leth swing away from where Sheldon Cooper and his posse of wildmen hang out.

During that visit, I got to enter their Ops Lab, where some awesomely-cool smart people are using Virtual Reality and Augmented Reality to deliver new ways of visualizing the excitement of space exploration.

(I’d like to say I got that tour because I’m pretty cool and bleeding-edge myself. But it was because my wife’s college friend is married to an astronaut. Seriously.)

During the visit, I got a chance to strap on a Microsoft HoloLens and do a walkaround on Mars.

Even if it was only a virtual experience, it was life-affirming to be able to use an amazingly immersive technology to visit one of the distant frontiers our ingenuity has opened up.

A place where they’ve never heard of Trump-versus-Hillary. I wished I could have stayed.

But people visiting NASA’s Kennedy Space Center Visitor Complex in Florida will be able to walk around the Red Planet this summer, thanks to a partnership between NASA and Microsoft: NASA gets people excited about exploring Mars, and Microsoft gets to show off HoloLens.

HoloLens is mixed reality, where you’re still aware of the world around you. That’s what makes it a great tool for things like tech repair and assembly: it’s already being used on the ISS so experts on the ground can walk astronauts through procedures, or to the crew can do maintenance, repairs and other operations using animated how-tos projected as overlays on whatever they’re working on.[spacer height=”20px”]

Virtual Reality is the 360-degree immersive experience that Oculus and Samsung, among others, are delivering. And in simplified forms, it’s already reached our mobile devices, too.

Some estimate say that manufacturers will be moving over 64 million VR devices a year within the next 4-5 years.

Beyond the entertaining aspects of VR, some enterprises are pioneering it as a medical and therapeutic platform. I’ve even had one as a client. Using VR, a person’s behaviors can be adjusted in profoundly useful ways: a burn victim can find themselves transported to a Himalayan plateau where they “feel” cold, making it easier for them to manage the pain during treatment. That’s just one example. Treating obesity and PTSD are other fronts where VR can be a blessing.

These immersions create experiences so realistic, they can re-wire how we think about our bodies and how we engage with the world around us.

Crafting reality, or distorting it?

I’ve pitched VR to clients for years, for everything from movie promotional tours to games. 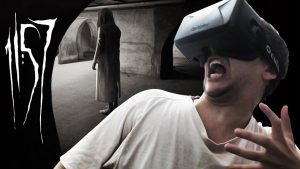 It’s especially effective for horror movies.  Imagine being trapped in a wraparound frighthouse with a filmic psycho. That’s cool shit, as one client told me.

It’s not that cool if it’s too close to the edge, though. Could you last through a convincingly immersive simulation of the 9/11 attacks?  I know I couldn’t.

Yet there are a lot of people who could. Or who wouldn’t blink at longform immersions in games or movies where VR has swallowed them in experiences that are far more affecting in VR than they could ever be on the biggest 2D monitor.

Yow know a lot of us would be up for it.

But if therapeutic VR has the power to affect how we’re wired to deal with the real world, who’s to say what prolonged exposure will do if it’s non-therapeutic? If it’s just entertainment?[spacer height=”20px”]

Some estimate say that manufacturers will be moving over 64 million VR devices a year within the next 4–5 years. That’s the kind of volume that gives impetus to devs, content creators and marketers to land-rush the segment with thousands of releases.

Yet there are dangers to VR.  As this article points out, you could trip over the wires.

But so far, nobody has extensively studied whether or not VR immersion can have lasting psychological effects.

Knowing marketers and our innate rabidity about jumping on the Next Big Thing and riding it to death, I wouldn’t be surprised if we charge heedlessly into that virtualized future, though.

Marketers have already worked hard at promoting unnatural body images. and sold vapes to young people with brutal disregard for whether or not their projects are dangerous. That’s the tip of the iceberg.  The history of marketing is littered with other examples. “Who knew cigarettes caused cancer?”

Ten or twenty years from today, will we be looking back in glum surprise at the unanticipated effects that VR immersion has when it’s not being delivered responsibly? With constructive intent?

Marketing leaders — brands, agencies, pundits, researchers, clinicians — should put their heads together and develop implementation standards for VR as a persuasion channel. While they’re at it, they should get game developers and studio bosses in the same room, too.

Do we know enough to set those standards yet? Nope. That’s the problem. We assume something is harmless before discovering the harm.

Before it’s the Surgeon General’s turn to give us the bad news, we should do the right research — not into how well VR can sell products, but about side effects and lasting consequences.

Then we can figure out the safe practices for using this tool. Before we’re caught making excuses again.