They said it was impossible, but a team of monkeys has written the complete works of Shakespeare – just.

[T]hese aren’t real monkeys, but virtual ones programmed by Mathematicians to bash away at virtual typewriters…Scientists say their digital monkeys have recreated 99.99 per cent of Shakespeare’s works – although clearly not typed in order.

THE SCENE: Seth’s first day on the job at Contentrify, an agency that trumpets itself as a think tank driving “The Next Level In Contentrification(TM).” He’s already been dazzled by the bright-eyed enthusiasm of his new colleagues, the offices that imbue a former Oldsmobile service center with Brooklyn hipster loft chic, the artisanal Keurig machines and Red Bull mini-fridges in every cubicle.  He’s meeting his new boss, Ron, who ushers him through a passcard-secured door into a basement room…

RON: Seth, welcome aboard! Glad to have you on the team here at Contentrify.

SETH: Yeah, happy to be here.

RON: I know we didn’t get a chance to talk during your interview process, but I head up the group you’ll be in, and I was very impressed by the resume, even that fanblog you did for…sorry, what was the college?

RON: Oh yeah, now I get it. “The Big WasSUP.” Clever…umm, what was your mascot again..?

SETH: We were more of a nerd school.

RON: I see that. Well, that’s cool, the nerdier the better, because you’ll be pretty stoked by what we’re doing here. I’d say we were pushing the envelope, except for us there is no envelope, you know? (Assumes visionary gaze toward a far horizon)

SETH:  I figured that, what with the NDAs, the background check…

SETH:   …the blood test just now down in HR…

RON:   Don’t sweat it, we keep them down to two or three a year.

RON: That’s because you’ve joined a special team that’s about to upend the whole universe of content marketing, Seth. Today is your peek behind the curtain. (Pulls aside curtain.)

RON: There are two species of chimp, and bonobos are the less aggressive and more peaceful type.

SETH: Well, you do have them all wearing chinos. And button-down oxfords?

RON: It’s part of a carefully-planned socialization regimen we’ve created to make them collaborative and task-oriented.

SETH: They’ve each got a cubicle? And…a computer? With a keyboard?

(As Seth watches, each monitor in the room displays an image of Richard Branson, which sends the two dozen or so primates into a frenzy of keyboard pounding)

RON: You ought to see it when we show them Mark Cuban. Not pretty. 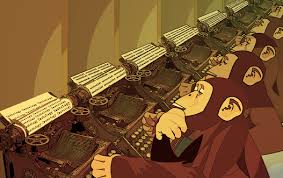 RON: Seth, did you ever hear of the Infinite Monkey Theorem? It’s a statistical theory that if you let a monkey hit keys at random for an infinite amount of time, it’ll produce an actual text.

SETH: Oh, yeah, I saw that on The Simpsons.

SETH: Put a hundred apes in a room with typewriters and they’ll eventually churn out Hamlet.

RON: Except what we’re doing here is training them to create the next generation of digital content.

SETH: What? But…they’re monkeys. Um, bonobos. I mean, that theorem is just kind of an illustration.  It can’t work in the real world.

(A green light flashes atop one of the monitors, and the bonobos’ frenzy stops. Seth sees an object drop from a vertical tube above that cubicle into the primate’s greedy hands, who unwraps and devours it)

RON: (Checking an app on his smartphone) That one just knocked out 400 words on Virgin Galactic.

SETH: But…it’s not quality content. With actual value to the reader? You just end up with just a big, sucking vacuum wrapped in clickbait, right?

RON: This may sound cynical, but to our way of thinking, sheer massive volume has to be the name of the content game from here on out.

RON: People are already just keeping afloat in content today. Tomorrow, they’ll be drowning in it. Our clients want to be seen and heard above the din, and there’s only so much intelligent, original content you can generate. So why not teach a roomful of monkeys to spit out clickbait?

RON: Whatever. That’s where you come in, Seth. We’ve needed a young, fresh, enthusiastic team leader in place to take this to the next level. Someone who believes in the potential of content marketing, knows AP style, and can make sure the feeding tubes aren’t clogged.

RON: We’ve got the fecal flinging down to a minimum. Like I said, don’t show them Mark Cuban. Or Demi Lovato, or Josh Constine. Or hyenas. They really hate hyenas.

SETH: But why do all this instead of a responsive CMS, or outsourcing, or…

RON: Who needs the development costs? Or the licensing fees?

SETH: If you’re just delivering crap content, then people have a crap experience. The only followers you’ll get are probably…well, crap followers. People who like crap. If everyone did that, you’d crapify the level of content everywhere.

RON: Well, Seth, we’re embracing of the fact that this is the future. Besides, will anyone really care about what’s “good” or what’s “bad” content anyway? (Points at ape who wrote Branson post) That’s Mister Gogo, and he’s got forty-six thousand Twitter followers.

RON (impatiently): So let’s start your orientation and get you fitted for a Tyvek suit, shall we?

SETH: It’s a disservice to your clients and users, you know? Content mills or content…monkey houses, it’s all the same. A real customer who’s worth having, they’re going to act on the best content, not the worst. Instead of lifting your clients up,  you’re dragging them down.

RON: Are you gonna want your blood back? Like the last guy?

SETH: He bailed early, too? When was that?

SETH: Maybe you should show them their staff before you make the offer.

RON (morosely): I mean, I gotta get somebody to take this job.  Guess who gets stuck with chimp wrangling until we make a hire? (Jabs thumb at his own chest) They couldn’t care less about washroom etiquette.  It’s like going to a Cubs game.

SETH: There’s that one ape, over there in the corner. Up on that dias or pedestal…I noticed that Mister Gogo took a piece of his Clif Bar over there and put it in a bowl on that ape’s desk.

RON: Well, yeah. They all do that.

RON: Hell, why not? He wrote the business plan.