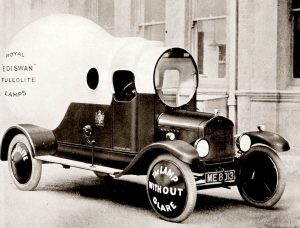 This story about the best promotional automobiles of the past 100 years made me think about how our attitudes toward advertising and marketing have changed over the decades.

Any fan of “Mad Men” (handraise here) can point to the behind-the-scenes cynicism of the setting and characters of that show, but even at their worst, there’s a redeeming quality in their dogged pursuit of the big idea, the killer campaign.  It’s the instance when Don Draper is at his most invested and sincere.

But we’re feeling jaded or betrayed nowadays.  The trust issues abounding in American society — we don’t trust politicians, we don’t trust churches, we don’t trust businesspeople or for that matter each other — are a meme.  A virus.  Whether they’re always justified is beside the point.  They’re the religion of the day, and our cynicism now passes for social glue.

You look at a Weinermobile, though, and you feel a whimsy and, dare I say, childish optimism you don’t get from other “engagements” with brands.  Too many other just prattle words, words, word, PODs that aren’t that pointed or different to start with. 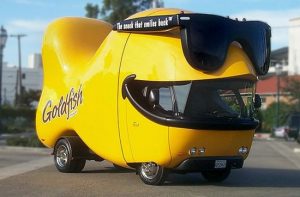 It used to be that a motorized hot dog was part of a greater, more glowing sense of life, America, and the possibilities therein.  Were we ignorant and gullible?  I’m not buying that.  My own parents were incredibly cynical people.  The Depression will do that to you.

But they knew there was an upside, if enough people pulled together behind it.

Somewhere along the line, something changed in all of us, the hucksters and the hoi polloi alike.

A Weinermobile, or a Sperm Bike (I kid you not — read the article!) may be just a rolling billboard, but it’s a tangible investment in a sincere belief about what you’re selling.  Or it seems that way.